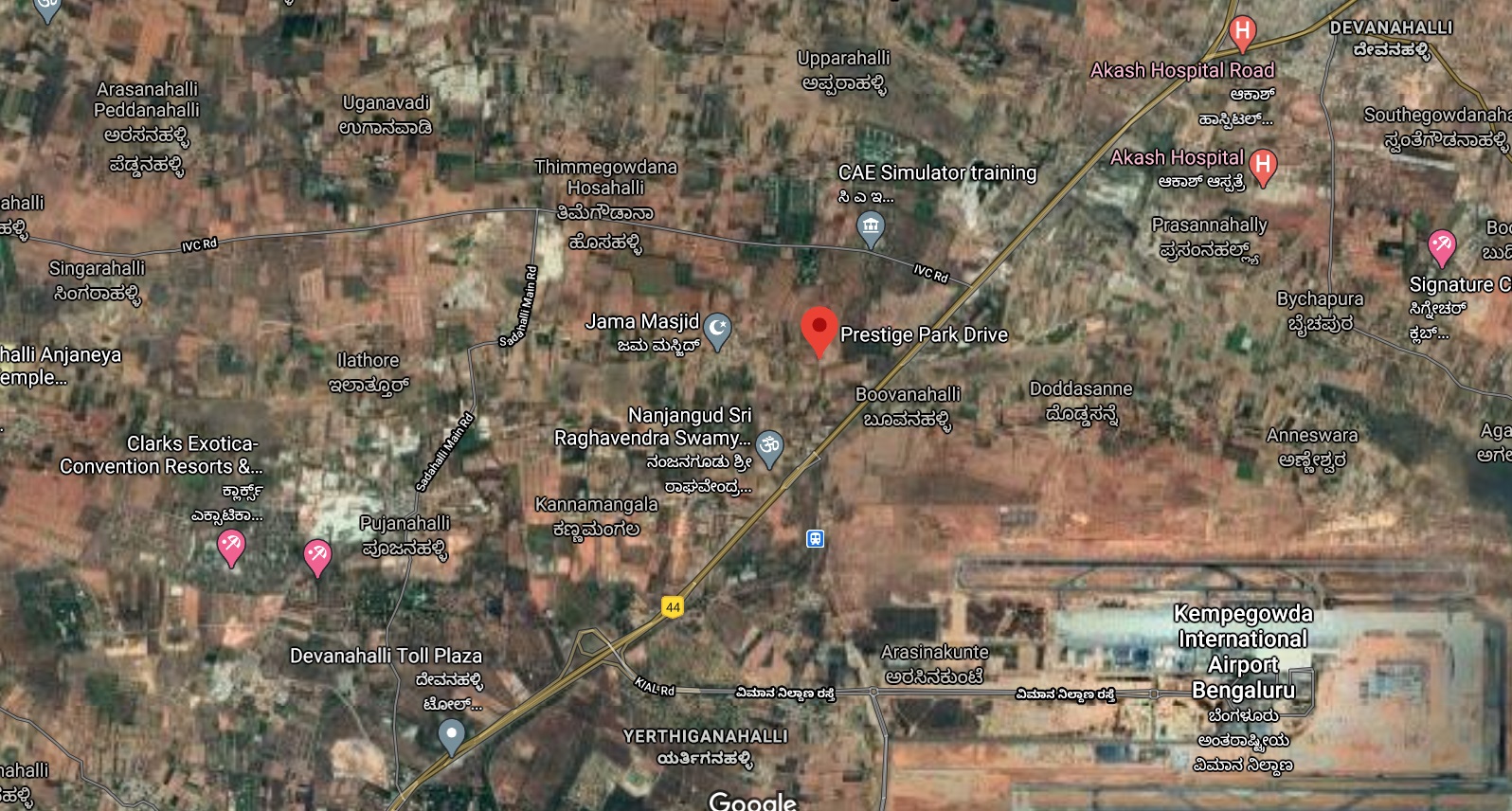 North Bangalore is also zoned to host Global Financial District near Devanahalli, spread over 150acres. This majestic campus will constitute specialized services for banks, stock exchanges, insurance companies and others players in the financial services sector. The premise also dedicates substantial land acreage for establishment of residential township for the employees of the institutions in the district. The Aerotropolis is just 18 Kms away from Devanahalli and it hosts the International Airport at the heart of this podium surrounded by the metropolis that features Aerospace Park, residential units, hotels, golf courses, multi-story residential high-rises, shopping malls, entertainment hubs, employment parks etc. The Aerospace Park majorly includes aircraft component manufacturing and accessories unit near the airport developed in 1000 acres area. About 250 acres of the land will be allocated for a special economic zone (SEZ) in the aerospace hub. The Bangalore Turf Club will soon be shifted to Chikkajala in Devanahalli taluk with an investment of Rs. 350 Crores for its development; this also lies in close contiguousness to Devanahalli. A considerable number of hotel chains are also coming up in close precinct of Devanahalli. The Oberoi at Bangalore International Airport, Oberoi Luxury hotel in the Hebbal lake area, Hyatt Residency, Taj Airport Hotel and Holiday Inn at Devanahalli are few of the top Hotels in near quarter to Devanahalli.

Major infrastructural developments close to Devanahalli include Information Technology Investment Region (ITIR), Aero SEZ (special economic zone) and the Devanahalli Business Park. The proposed ITIR is a explicitly delineated investment region set over a minimum area of around 40 Square Kms (about 10,000 acres of land),which would feature Special Economic Zones, Industrial Parks, Export oriented units, Free trade and Warehousing zones. The ITIR is an amalgamation of production units, logistics, public utilities, environmental protection mechanisms, residential areas and administrative services, with state – of – the – art infrastructural arrangements. The ITIR is all set to be one of the biggest infrastructure projects in Karnataka's history which would soon be coming up in North Bangalore. This initiative is expected to provide direct employment to more than 1.2 million people and indirect employment to more than 2.8 million people.

The Special Economic Zone or SEZ is another prime establishment shaping up in North Bangalore close to Devanahalli. This premise is devised over 3000 acres of total land area out of which 900 acres have been already allocated to 48 multi-national companies, including 100 acres to HAL. This SEZ zone caters to both export-oriented industries and industries that deal with maintenance, repair and overhaul-related activities in the local market.

Devanahalli Business Park is yet another major landmark of Bangalore coming up in close proximity to Devanahalli. This is one of the imperative projects destined in close adjacency to Bangalore International Airport (BIA). Devanahalli Business Park or DBP is outlined to be developed over 413.65 acres land enclosure owned by KSIIDC (Karnataka State Industrial Investment & Development Corporation Limited). This development stretches along the National Highway 7 (NH 7) impinging the northern boundary of Kempegowda International Airport.

Devanahalli is a core locality of North Bangalore situated at the helm of developmental activities owing to its proximity to Bangalore International Airport and to the upcoming SEZs of KIADB Area. A perfect destination for residential investments, Devanahalli is the next big real-estate hotspot of Bangalore. The infrastructural developments are expanding swiftly to include all required social and physical frameworks. Many notable residential communities by top real-estate brands are shaping up in neighbourhoods adjoining Devanahalli giving diversified housing options to the investors. Owning a residential property in North Bangalore means easy access to International Airport, close proximity to major IT Parks and living amidst the luxury of top- notch civic amenities like renowned schools, colleges, hospitals, employment hubs, shopping malls, entertainment hubs, super markets, banks and plush restaurants.

On the connectivity front, Devanahalli is well connected through various public and private transport modes. Frequently travelling BMTC (Bangalore Metro Transportation Limited) buses, cabs, taxis, auto-rickshaws keep Devanahalli consistently connected with rest of the Bangalore. The upcoming Metro Rail network would be extended to International Airport and this would mean the localities abutting Devanahalli will have excellent connectivity to Metro stations. The nearest Metro Stations to Devanahalli are Peenya Industry Metro Station, Yeshtwanthpur Metro Station, Peenya Metro Station, Jalahalli Metro Station and Dasarahalli Metro Station all within the short travel precinct of 15 to 20 minutes . The potential for residential and commercial settlements primarily depends on the presence of well established social infrastructure in and around any region. The constant up-gradation of civic amenities has been a major booster for the augmentation of real-estate market here. Educational Institutes like Delhi Public School, Reva Group of Institutions, Canadian International School, Royal Concorde School, Trio International School, Mallaya Aditi International School, Jain International School, Vidhya Shilip Academy, KNS Institute of Technology, Army Institute of Hotel management, Government Veterinary College, Bangalore International College, GKVK, Government Flying Training School and Atria Institute of Technology are in near proximity to Devanahalli. Few of the nearby health-care facilities in and around Devanahalli are Columbia Asia Hospital, Baptist Hospital, Dhanvantri Hospital and Cauvery Hospital among others.

The Science Park, an Aerospace Park and 1000 crore financial city are some of the upcoming projects in the locality. The Satellite Ring road is developed to connect to Doddaballapur. The NH-7 to Hyderabad takes you to the historical Nandi Hills. The region has also appealed many IT giants like Wipro, Infosys, TCS, Cognizant and many more multinational IT companies. The vicinity of many conveniences like hospitals, restaurants, ATMs, banks, supermarkets has made the locality one of the best area to invest in and most convenient to live.

The multi-billion dollar Devenahalli Business Park is a giant project initiated by the government over 408 acre lands. Infosys recently acquired 10 acre land in Devenahalli, Shell and IFCI campuses will be completed soon. Hebbal is just 8.2kms away from Devanahalli and all major IT hubs are close to this locality. Manyata Embassy Business Park, IT SEZ located in the outer ring road is very close to Hebbal. The IT industries uplift the growth and development of the locality and outgrow the demand of real estate in the arena.

there is a great demand for real estate in Devenahalli. The proximity of many tourist spots nearby has led to the rising price of real estate here. This is a high potential point for residents as well as for people who are looking for commercial buildings in the airport region. It is an ideal place for people who are planning to construct independent houses also. The connectivity of NH-2077 takes the residents to schools, GITAM University, hospitals, Rural DC Office, Engineering and Medical College.

The open green space is attracting more buyers as it is an exemplary place to live in considering its proximity to the city and other arenas. The Devanahalli near which Prestige Park is located is well connected to International Airport, Bangalore Metropolitan Transport Corporation and Railway station for easy commute. A metro line is also being proposed to enhance easy travel.

The project is designed for luxurious lifestyle, comfort living, in and around conveniences for your cosmopolitan family with serene ambience. The project is close to ITPL, Sarjapur, Marthahalli, Hebbal and other localities. This area promotes significant growth in residential and commercial choices for investors and helps them draw huge profits through investment. Kempegowda International Airport being the third busiest airports in India makes it an idea locality for NRI investors. The fast growth of IT in and around leads to fast development of the area and increase in its valuation and ideal to live or invest here.

Devanahalli is located 40 kilometres to the north east of Bangalore and is a town in Bangalore rural district. Approximately 5 km from the town was established the Kempegowda International Airport and the development of this air terminus and the subsequent influx of personnel working in the airport ushered in a rapid growth in the real estate of the town. On the heels of this development came the development of the Devanahalli Business Park and two upcoming IT parks in the vicinity, adjoining the airport and spanning nearly 400 acres. Also upcoming are the development of an Aerospace Park, a Science Park, and a Financial City. All of these have sparked a rapid growth in real estate development of Devanahalli with all major real estate development companies acquiring land in the area and planning the development of luxurious and high-end residential projects. Devanahalli is located near the 12,000-acre BIAL IT Investment Region, which is slated to be the largest IT region in the country. With all these commercial projects currently underway, there has come a huge movement of working population employed in these hubs into the area, further pushing up the demand for real estate in the town. Excellent connectivity and accessibility to the city via the six-lane Bellary road has provided another stimulus to the real estate growth and development as has the proposed new satellite ring road that will connect Devanahalli to Doddaballapur. Also sparking the real estate growth in Devanahalli is the rapidly growing and developing civic and social infrastructure of the area. With a multitude of reputed educational institutions in the area and easy access to quality medical care, this area has become extremely lucrative as a real estate investment and as a place of residence for many potential buyers. The smooth and easy connectivity to the city and its many conveniences as well as to entertainment and shopping options and top-notch hotels is an added bonus, luring investors into this area and driving the trend in rapid growth of real estate in and around Devanahalli.

Devanahalli, located 40 kilometres to the north-east of Bangalore is today one of the fastest growing areas of the city. The establishment of the Kempegowda International Airport in this locality saw a slew of commercial and residential real estate projects coming up in the area, hand in hand with extremely rapid infrastructure growth. Devanahalli is now rapidly emerging as one of the new main IT hubs of Bangalore. There are the Hardware Tech Park, Aero SEZ, and International Tech Park coming up in the vicinity of Devanahalli. There is also the proposed development soon of a Science Park and a Financial City in the area. This and the fact that the Kempegowda International Airport is now the third busiest airport in the county are attracting a large working population to this area, leading to a rapid growth in the real estate industry. All the major players in the real estate industry are now in the process of developing premium, luxury residential units in the area. The six-lane Bellary road provides excellent connectivity of this locality to the city, making it extremely accessible from any part of the city. In addition, Devanahalli is slated to be part of the phase 2 of Bangalore’s Namma Metro project, which will boost connectivity to the area. The locality has a number of well- known and reputed educational institutions in the vicinity, which include the Canadian International School, Ryan International School, and Akash International School among others. The presence of top-notch medical institutions such as Columbia Asia Hospital and Leena Multispeciality Hospital in the vicinity further adds to the allure of Devanahalli as a place of residence. In terms of entertainment and recreation, there are shopping hubs like Elements Mall and World Market Mall that provide all that an individual would want. All these factors, have contributed to the rapid growth of real estate in Devanahalli, making it a sought-after destination in terms of real estate.